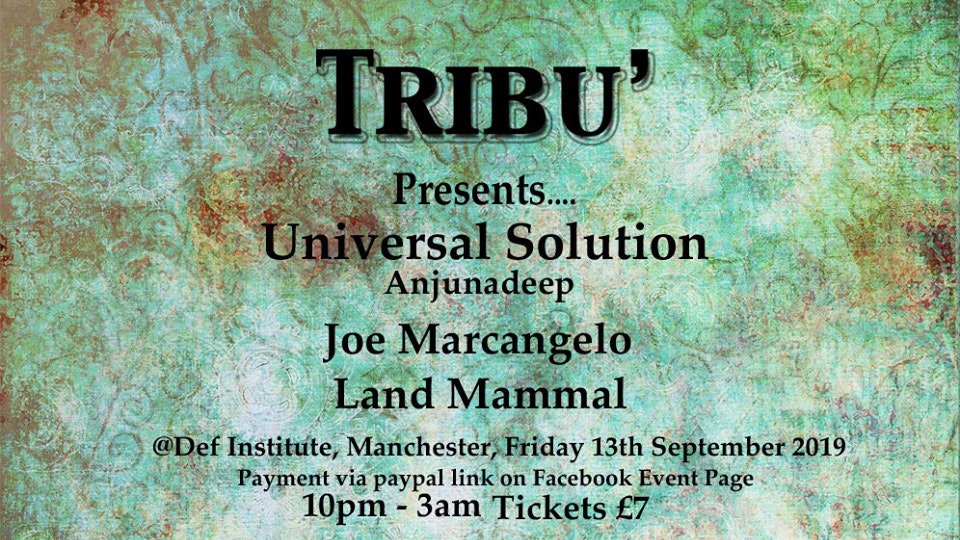 NOTE: Only 60 capacity so will sell out!

We’re delighted to welcome Universal Solution for our opening night at the Den at the Def institute Manchester.
We anticipate an intimate sell out crowd of just 60 for a night of melodic / progressive house grooves.

Universal Solution is the brainchild of Manchester based producer Gavin Holland. He produces melodic progressive house and is currently signed to Anjunadeep, Silk, Colorize, Manchester Underground Music and others.

2016 saw Universal Solution support the mighty Above & Beyond on their European tour spanning sold out gigs in Glasgow, Dublin, Belfast and his hometown of Manchester at the Warehouse project.

Providing the support on the night will be residents Joe Marcangelo and Land Mammal.

Joe is a popular DJ on the scene around Manchester and the UK. Catch his Meoteric monthly mixes on Soundcloud with a cool blend of progressive house.
Joe has been djing /collecting records from the age of 15 and in this time he has played various events in various music scenes,but in recent years got got back into the progressive scene and moved up from vinyl turntables to CDJ’s.
Joe has rubbed shoulders with some of the industry’s top dogs such as Quivver, Dimitry Molosh, Anthony Pappa, the UCAP afterparty for Sasha refracted and a Danny Howells after party in Ireland.
He’s also had experience working with BBC Radio Lancashire and XS Manchester.

Land Mammal from the midlands has recently been busy writing new music with his blend of melodic grooves.
Since the age of 14 he started playing the guitar and moved into the house music scene at 19.
Under Steve Adams he’s released several tracks on Tactal hots before taking a break in music.
Under his new guise Land Mammal his new track ‘vibrations’ has just been released by Spring tube and is currently working on an EP for another label.
His track ‘All seeing is too be released soon on Abstract Space Records’.
His DJ experience goes back to Ministry of Sound, Brixton Jamm, Electronic Sessions boat parties with some of the biggest artists on the scene like Basement Jaxx, Dave Seaman, Max Graham and Jody Wisternoff.

We look forward to a great night and hope see you all there!