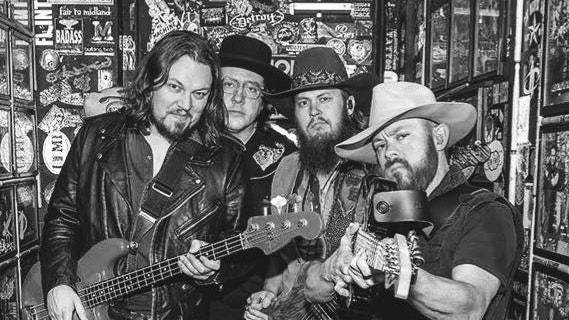 [sold out] The Steel Woods

A quartet of Southern rock traditionalists from Nashville, the Steel Woods lay claim to the sound pioneered by Lynyrd Skynyrd. Like Skynyrd, the Steel Woods balance heavy blues-rock with Southern poetry, and they add a bit of plainspoken outlaw country to the mix, as evidenced on their 2017 debut Straw in the Wind.

Old News Prior to forming the Steel Woods, guitarists Wes Bayliss and Jason “Rowdy” Cope were both pursuing musical careers. Cope found work as a session musician and played in Jamey Johnson’s band, but once he met Bayliss at a Nashville gig, the two clicked. They became friends and wound collaborating, adding bassist Johnny Stanton and drummer Jay Tooke to round out their lineup. An eponymous EP came out in 2016, and the next year saw the release of Straw in the Wind on Thirty Tigers/Woods Music. A cover of Tom Petty’s “Southern Accents” arrived in December 2018 as the first track off their 2019 full-length Old News.They’ll be playing live Wednesday 4th September.