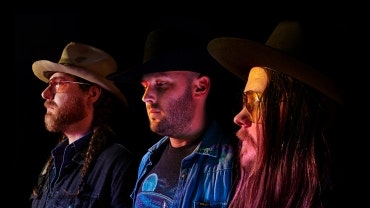 The last time we heard from the Quaker City Night Hawks, they were traveling the country in support of their Lightning Rod Records debut, El Astronauta, an album that mixed the greasy strut of 1970s rock with doses of down-and-dirty Texas blues, science fiction, and Bible Belt boogie. The guys were Texans by birth, but their music whipped up its own geography. With its spacey, southern stomp, El Astronauta could’ve been the soundtrack for a road trip across the American desert…or even the house music for a weekend night at the Mos Eisley Cantina. Noisey said “this ragtag bunch of boundary-pushers is likely to appeal to fans of Fu Manchu and Tom Waits in equal measure,” and Rolling Stone proclaimed Quaker City Night Hawks songs “fly in the face of mainstream rules.”