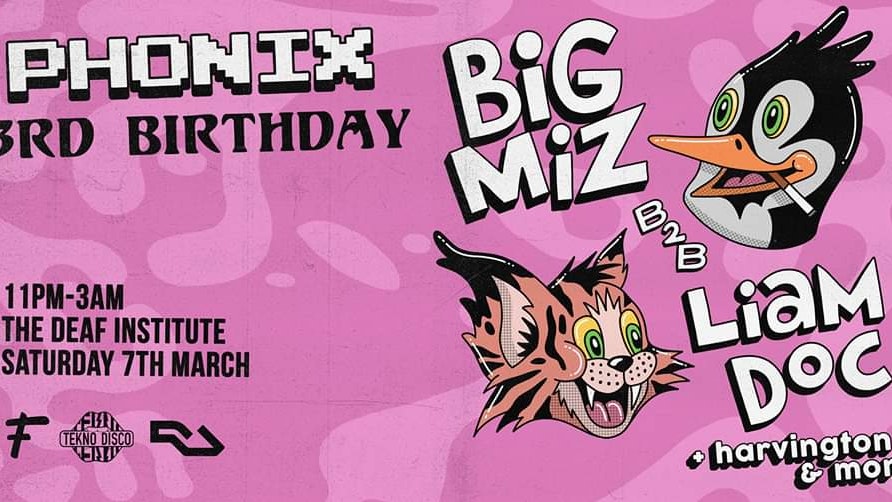 Phonix returns to the deaf institute to celebrate our 3rd Birthday with an old and new favourite.

Big Miz [ Dixon Avenue Basement Jams / Dansu Discs ]Since the days of his early prominence as part of his local clubbing scene, Glaswegian artist Big Miz has progressed and developed into a key producer and DJ to emerge from the city’s ever fertile house and techno field. His regular releases on record label Dixon Avenue Basement Jams as well as output courtesy of Shall Not Fade and Monki’s ‘& Friends’ label have helped to secure his position as one of the most exciting artists to break through into wider consciousness in the last few years.Having already played numerous UK and European shows as well as recorded Boiler Rooms live from Sub Club and Fly Open Air festival, Big Miz continues to stake his claim as a household name for the future of underground music.

Liam Doc [ Eyeangle Records / FLY CLUB ]Scottish DJ and producer Liam Doc has spent the past two years working closely in the studio with artists at Eyeangle Records, taking influence from everyone he works with to create eclectic sets and sounds. With a Boiler Room last year and a huge upcoming release on Denis Sulta’s sub label ‘Silver Service’, Liam is sure to be a major upcoming talent.

Harvington [ BlackBox ]Joining them will be very own brother duo; Harvington. Made up of BlackBox resident and York boss Gully and Phonix Manchester co-owner Kings.

Tekno Disco DJs – Tekno Disco have been making waves all over the country with their parties and to support them they have a talented set of residents. After holding down room 3 at our last birthday we are happy to have them back playing at this party!