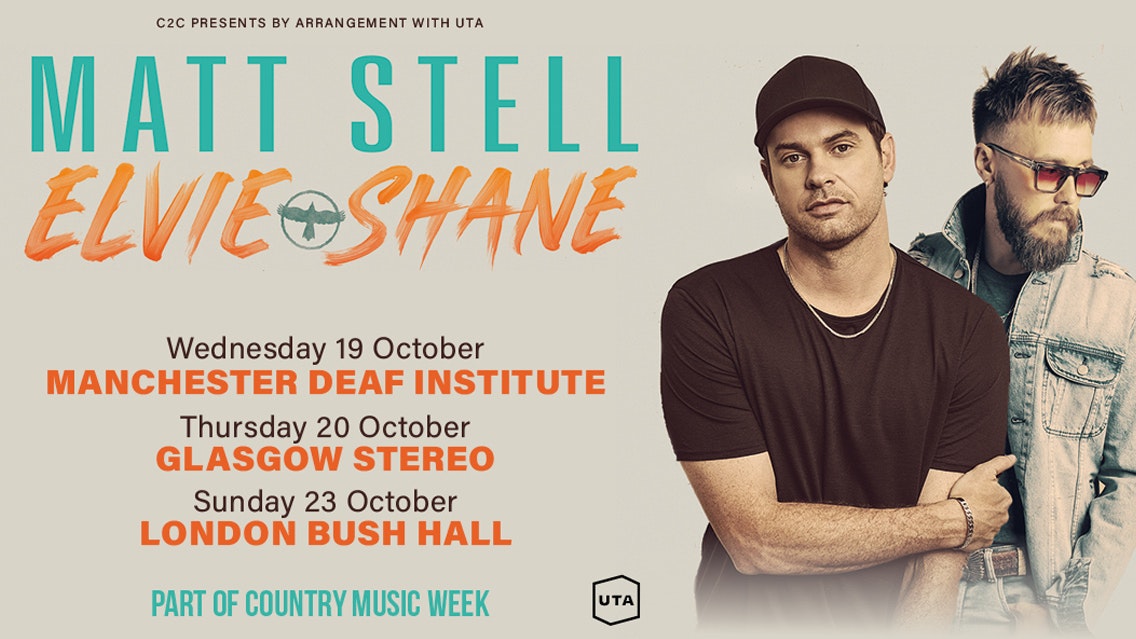 Matt Stell and Elvie Shane will take to the stage together for a very special show as part of Country Music Week. This is a unique chance to see two of country’s future superstars perform an electric set filled with their own hits and shared stories.

A native of small-town Kentucky, early touchstones like Dwight Yoakam, Steve Earle and John Fogerty joined Wheelhouse Records’ Elvie Shane’s Gospel roots to form the bedrock of his taste –along with R&B classics like The Temptations and modern superstars like Eminem.

Shane’s picture-based lyrics and knack for storytelling lead to his signing with UTA and he has since opened for Jason Aldean, Toby Keith, Brothers Osborne Brett Young and Lady A, to name a few. Shane also just wrapped a stint on the road opening for Brooks & Dunn on their 2021 Reboot Tour.

In only the last three years, Matt Stell has quickly made his mark on country music, amassing over half a billion music streams across his catalogue, including back-to-back No. 1s “Prayed For You” and “Everywhere But On” along with fan favourites “Boyfriend Season” and “That Ain’t Me No More.” He has since made his Opry debut and performed on Good Morning America, The Kelly Clarkson Show, The Late Show with Stephen Colbert’s #LateShowMeMusic digital series, Bachelor In Paradise and sung the national anthem for NASCAR and NFL events.

He launched his Give A Damn Foundation, kicked-off his hugely successful 8-week Instagram-live series, Penned Up, and was the first-ever artist to receive a virtual plaque from the RIAA for “Prayed For You,” which is now approaching double Platinum status, and is an ASCAP Pop and Country most-performed song awards winner. In 2020 he released his new EP, Better Than That, the follow up to 2019’s Everywhere But On, and is prepping a new project for 2022, led by new single “Man Made.”