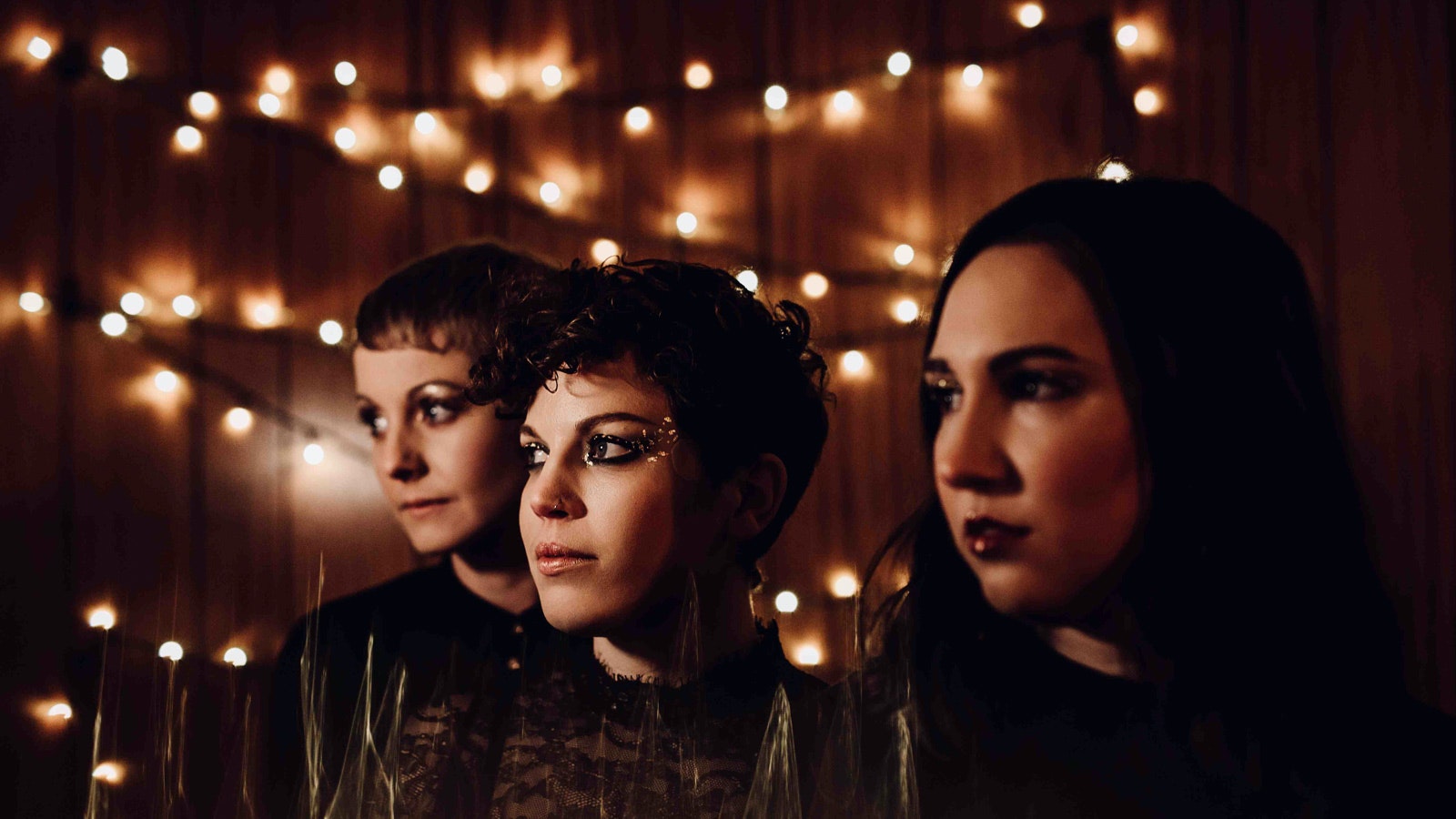 Haiku Salut return to dazzle audiences with their spectacular ‘lamp show’ on 3 November.

Haiku Salut are an instrumental dream-pop-post-folk-neo-everything trio from the Derbyshire Dales. The group consists of multi-instrumentalists Gemma Barkerwood, Sophie Barkerwood, and Louise Croft. Between them, Haiku Salut play accordion, piano, glockenspiel, trumpet, guitar, ukulele, drums, and melodica. Their music also features electronic elements, which they refer to as “loopery and laptopery”.

Influenced by the evocative film soundtracks of Yann Tiersen and Benoît Charest, the genre-melting electronica of early Múm, and the impressionistic writing of Haruki Murakami, the band released their debut album Tricolore in 2013, to critical acclaim. The album was awarded four stars by The Guardian, Uncut, Mojo, Drowned In Sound, and many more, and in the summer of 2013, the trio won the Green Man Rising contest, and opened the main stage at that year’s Green Man Festival. In November 2013, the band toured the UK in support to Lau. They later wrote about the experience in their debut book, “Japanese Poems Steal Brains”, a fully illustrated collection of haikus, which told the story of the band to date.

Haiku Salut’s second album, “Etch And Etch Deep”, was released in July 2015, to similar acclaim. The album was awarded four stars or above by The Observer (“the album Four Tet might have made after Rounds’), The Guardian, Mojo, Uncut (“both warmly familiar and completely, fearlessly new”), NME, Clash, Drowned In Sound (“with luminous vibes and electronics that chime, strum, sparkle, dance and glow, the trio evoke worlds within our own”), The Financial Times, God Is In The TV, Gig Soup (“one has to wonder if the band haven’t only created a masterpiece but also a genre that is their own”), The 405, London In Stereo, The Skinny, and many more.

Haiku Salut are famed for their mute performances, allowing the music to cast its magical spell. One memorable live review described them as “an experimental orchestra made of loop pedals, accordions, melodicas, and god knows what else. It feels like watching Mary Poppins pull another instrument out of a never-ending bag.” In April 2013, the trio debuted their Lamp Show, in which they are accompanied by a stageful of vintage lamps which are programmed to flash, fade and flicker in time to the music. The band have since toured the Lamp Show around the UK, playing in a host of unusual venues – a library, a ballroom, a theatre, a Victorian swimming baths, and several churches. They are yet to play a planetarium but it’s only a matter of time.

Haiku Salut’s third album ‘There Is No Elsewhere’ was released on 7th September 2018 on PRAH Recordings to critical acclaim (“Formidable and fragile, beautiful and fascinating” – Drowned In Sound. “Exactly what electro-pop can and should sound like in 2018” – Exclaim)

They collaborated with Aaron Bradbury and Robin Newman to create a virtual reality immersive video to single, Occupy which can be seen at their upcoming VR screening events.